Consider the following analysis, which compares geographic and risk-based methods. For the purposes of the demonstration, we will start with a 5 meter diameter gas cloud, at 100% LFL – a common size of cloud used for mapping purposes.

The images below show the 5 meter spherical gas cloud used in geographic mapping (left, from Detect3D), and a 100% LFL gas cloud of roughly the same volume calculated from a leak source using CFD modeling (right, from in:Flux):

But the alarm level of gas detectors is much less than 100% LFL, let’s say 20% LFL. While it is common practice in geographic mapping to keep the gas cloud at the same diameter, it is sometimes expanded such that the flammable mass is kept constant but the concentration is reduced. For this demonstration, let’s take this optimistic approach: from the flammable mass of a 100% LFL, 5 meter diameter gas cloud, we can calculate that the diameter of a 20% LFL cloud is 8.5 meters (left in image below).

Let’s do the same in the CFD model. Instead of looking at the 100% LFL gas cloud, we will instead look at the 20% LFL cloud (right in image below).

The gas cloud from the CFD analysis is much larger, more than 20 times the volume (6,300 m3 vs the geographic gas cloud volume of 327 m3). If we zoom out further, we can see just how much bigger the gas cloud at the alarm level is. 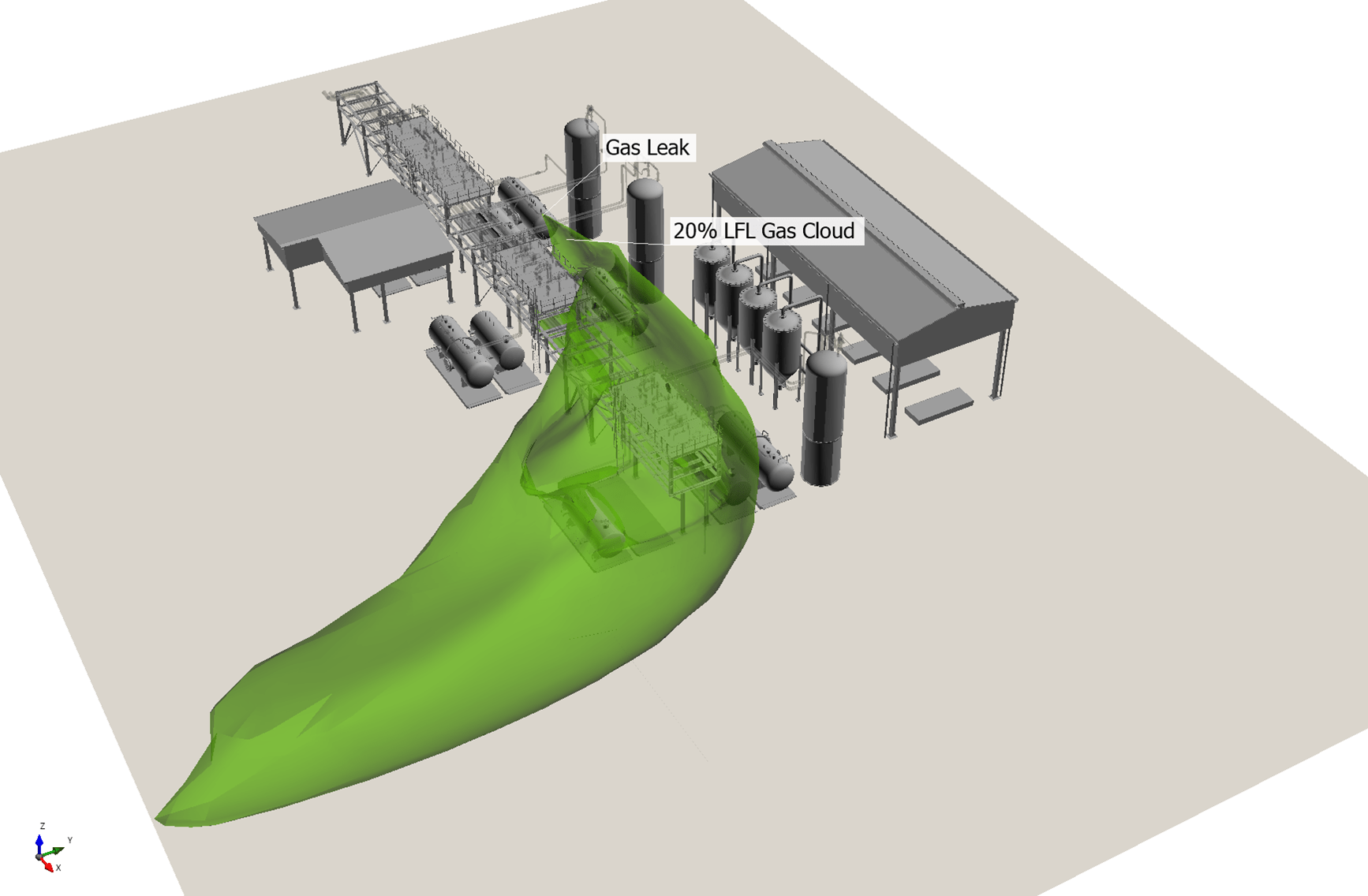 The transition from flammable volume to detected volume is natural for any CFD-based gas mapping.

But with geographic mapping is not simple: there is little physical basis for any scaling of the gas cloud based on concentration, and any scaling that does occur is likely to be highly conservative.

If your project uses geographic gas mapping, and your detector count is much higher than expected, this is the likely reason. Risk-based gas mapping removes unnecessary conservatism while, at the same time, modeling the physics at a higher level of realism.

About the Author: Oliver Heynes

My passion for building intuitive software that brings insight to engineers was fully realized when I co-founded Insight Numerics. Putting CFD to one side, I developed Detect3D, a software program designed to position fire and gas detectors. As well as learning new programming languages, I also learnt that I had a passion for Entrepreneurship and Business Strategy. But my interest in CFD was always present, and in 2015 I envisioned a CFD product for dispersion modeling where the almost the entire process was automated. The vision became reality in 2018 when we released our second software product, in:Flux.